Americans come in all shapes and sizes. Consequently, there are at least as many concealed carry techniques to suit the needs of every body-type of the legally armed citizen.

Of these top five concealed carry methods, one will likely stand alone as YOUR best choice for carrying a concealed weapon.

*Analog clock positions will sometimes be referenced in order to indicate exactly where on the belt line the firearm is being carried. For instance, 3 o’clock would indicate the right hip and 9 o’clock the left hip. 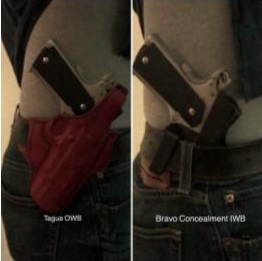 This is likely the most popular location for a concealed firearm, whether outside the waistband (OWB) or inside the waistband (IWB). This position could be anywhere from the 3-5 o’clock positions and mirrored for lefties. With proper dress attire, this position affords the carrier great accessibility along with a very fast draw from the holster. Many holsters, such as the Alien Gear holster displayed in the main image above, offer the ability to tuck your shirt in over the gun and under the clips, making this a concealable option even when wearing a button-down.

There are downsides though. Almost anyone who chooses to stare may notice a bulge on one side of your body. You should learn to squat instead of bending over, as the pistol-grip will obviously jut out from one’s back with such a motion. This becomes truer the larger the sidearm you choose to carry. 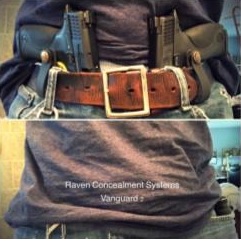 Generally found between the 11-1 o’clock positions, appendix carry is my personal favorite and what I consider the absolute best place to conceal carry inside the waistband. Since 2015 it has understandably been referred to as the “Caitlyn Carry Position”, but for those who are willing to adhere strictly to the gun safety rules, there are too many incentives not to try it.

Though some skeptical men may grimace, appendix carry is often considered the best way to conceal carry for a woman.

Appendix carry may not conceal as thoroughly as certain deep concealment options, but for being at least as accessible as any hip holster, it’s hard to beat! Being located right over the core of the body, it may be the most retainable AND accessible location to carry a weapon. Whether on the ground, seated, standing, or even entangled with an aggressor, appendix carry is almost always within easy reach of either hand, regardless of which hand is your strong hand.

One seldom mentioned perk of appendix carry is that nearly any quality holster for this position can usually be transitioned over to the hip if the appendix is ever found to be uncomfortable. 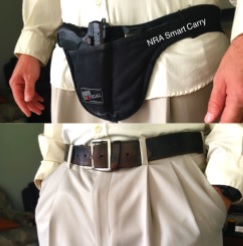 This is a rather nuanced category of concealed carry and tends only to be used by the most dedicated of concealed weapon carriers. Deep-concealment carry usually trades some accessibility for abundant subtlety, but you will be empowered to carry in the most contexts with minimal fear of detection.

One specific product I can’t recommend highly enough is the NRA Smart Carry Holster, which is far and away the best way to conceal carry with your shirt tucked in. It goes over your button-down shirt, but well below your beltline. It is my preferred method of carry when in a professional setting, and it even keeps your shirt more tightly tucked so that your appearance doesn’t become rumpled and sloppy by the end of the day.

Deep-concealment carry likely will require some trial and error, but the payoff allows you to be unnoticed by anything short of a metal detector! 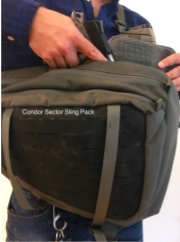 This is undoubtedly the most versatile method to carry a gun. The two most common versions of this style of carrying are probably done with a fanny pack or purse, but the list goes on indefinitely from there, and even with just those two options there are endless variations.

Many off-body accessories are designed with concealed carry in mind. I personally own a Condor sling bag, as well as a Maxpedition backpack, each with dedicated concealed weapon pockets.

On-body holsters are usually a better option, but a gun in a separate bag will almost always be the most comfortable concealed carry position and considered by many to be the best way to conceal carry at work.

I know this to have been true for one former boss, who toted around a dedicated purse that was specifically designed to carry a gun. Not once did she ever draw unwanted attention because someone believed she had a weapon. 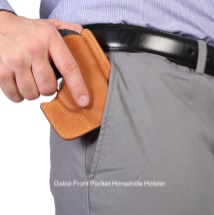 Pocket carry may well be the runner-up to strong-side hip carry as far as popularity goes. This option tends to be very comfortable and easily the most convenient. However, this convenience and comfort usually comes at the expense of accessibility and being limited to diminutive, less usable firearms.

This is still a viable option, but should only be employed with a pocket holster in the same pocket routinely, and only if it is the best option that will allow you to carry regularly.

You carry a gun so that you won’t suffer a violent death. Therefore, convenience should never dictate how you carry that gun.

Regardless of how you conceal your weapon, remember to train often, practice constantly, carry routinely, and stay safe!